The holder of the EPSC Award for 2014 is Dirk Roosendans and his team at Total, who were recognised for their work on applying QRA methods to land use and plant design. More information can be found here.

No award was presented in 2013, as it was felt that it would overlap with the EFCE Excellence Award for process safety. In recognition of work on a project named Total R², a team led by Dirk Roosendans was given the 2015 EPSC award. The R² project was chosen from among many worthy nominations because it develops both a method for using QRA in placement of equipment within a facility, as well as providing a software tool for applying the method.

In 2012, Pol Hoorelbeke, a researcher at the Free University of Brussels and Vice President of HSE for Total Petrochemicals, was given the award for his work on mitigation of the explosive risk of hydrocarbon clouds. His work involves the use of dust or aerosol sprays to change the combustion properties of an explosive mixture, reducing overpressure.

The holder of the EPSC Award for 2011 is Dr. Martin Glor, recognised for his work on electrostatic ignition hazards in fluid transport.

The award in 2010 was presented to the United States Chemical Safety Board for their safety video series which presented the causes and mechanisms of past incidents in an accessable manner. That year was the first time that the award was given to a non-european organisation.

In 2009 the award was presented to Dr. Francis Stoessel of the Swiss Institute for the Promotion of Safety and Security, for his work on the development of the criticality scale for chemical batch and semi-batch reactions. 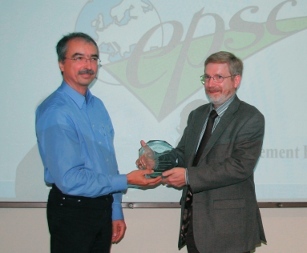 In 2008, the winner was Professor Andrew Hopkins, the first non-European to win the award, for his work on learning from accidents and process safety indicators.

The 2007 winner was Dr Helmut Schacke for a life long contribution to process safety.

The 2006 winner of the Award was Dr Roland Ott for a life-time achievement within the European process safety community.

In 2005 the recipient of the EPSC Award was Deltalinqs (Port and industries association Rotterdam safety management network) for their efforts to develop a regional knowledge network in the field of Safety Management Systems and incident investigation.

The 2004 Award was presented to Anders Jacobsson for his contribution to process safety particularly to Safety Management Systems for small and medium sized Enterprises and Management of Change.

In 2003 EPSC recognised Robin Brooks for his application of computer modelling to chemical operations to improve process safety.

In 2002 the winner of the EPSC Award was Professor Hans Pasman in recognition of a lifelong achievement to the process safety in Europe.

In 2001 for the first time in the award’s history, a team was awarded the coveted prize. A combined team from the Catholic University of Leuven and DSM were recognised for their research in determining and modeling the explosion characteristics related to auto-ignition and detonation of various gas mixtures at extreme temperatures and pressures.

In 2000 Jürgen Schmidt of BASF was the recipient of the third EPSC Award for his work on the sizing of two-phase flow relief systems.

In 1999 the Management Board chose to honour the last Bernard Hancock, formerly International Co-ordinator of EPSC, who had played an enthusiastic and successful part in establishing the Centre in 1992.

The EPSC Award was first presented in 1998 to Stuart Duffield of the Joint Research Centre (JRC) to recognise his work in producing the RELIEF computer package – a tool for understanding the phenomena associated with, emergency pressure relief systems for batch-type reactors and storage vessels.