The EPSC Award is presented in recognition of outstanding achievement in advancing the theory or practice of process safety in Europe. It is presented annually, to a winner is chosen by the EPSC Board from nominations taken over the previous year. 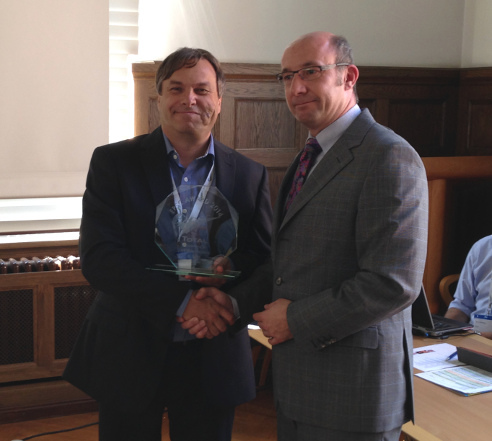 In recognition of work on a project named Total R², a team led by Dirk Roosendans has been given this year's EPSC award, presented at the Spring TSC meeting. The R² project was chosen from among many worthy nominations because it develops both a method for using QRA in placement of equipment within a facility, as well as providing a software tool for applying the method.

Total R² is intended for use in the design of facilities to handle flammable, explosive or toxic substances, such as hydrocarbon processing sites, transport networks, or pipelines. It is used to determine safe distances between process units, to prevent escalation of an incident via "domino effect" damage cascades, and also to determine areas of risk to structures or people. Use of this data during facility design allows optimal use of land without compromising safety.

Dirk Roosendans was presented with the award at a meeting of the EPSC technical steering committee hosted by BAM.